Technocratic governance is a form of governing whereby subject matter experts are put in charge of policy and decision-making (i.e. engineers in charge of government). This is not necessarily a bad thing, however it does present some issues – particularly for smart cities.

As cities become smarter they will inherently become more reliant on technology. Depending on the rate of technological evolution, this reliance may reach a point where today’s politicians no longer have enough expertise to fully understand how the city functions, and therefore how to run it and maintain the systems it relies on. The governance of such a city could then fall into the hands of the engineers that created them, as the management of cities becomes more technical rather than political. 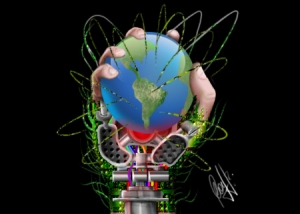 So why might this cause problems? Engineers and technologists tend to have a very analytical and system-focused mentality. With all the data being produced by smart systems, it would be very likely that the management of the city would become very technical. Issues that arise may be looked at from a purely mathematical or technological perspective and solutions might be overly functional in nature. Effects on qualitative aspects of life, such as culture, politics, and humanity may either be neglected or treated as a secondary priority.

The main concern here is that technology rarely solves deep-rooted issues. It can only generally solve the problems that arise from deeper complications, not the complications themselves.

As modern urbanism delves deeper into the technological sphere, we must always remain vigilant that we keep one eye on the bigger picture so that we are able to recognise when technology is actually helping to solve issues, and when it is simply masking systemic issues that need to be addressed at a different level.